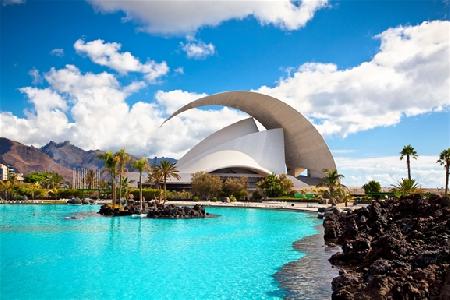 Santa Cruz is the largest city in Tenerife, and together with Las Palmas it acts as the capital of the Canary Islands. It is mainly known as a popular resort with a wide sandy beach. Its symbol is the modern Tenerife Auditorium.

The city was founded in the 15th century by the Spanish on the site of a previous local town. For centuries it was a center of commerce for bananas and tobacco. As a tourist center it developed only in the middle of the 20th century. Santa Cruz is the only sandy beach in Tenerife. It is not natural. The sand was brought here from Africa. Thanks to this, the city began to compete with the most visited beaches in Gran Canaria.

Practically built from scratch in the 16th century. Santa Cruz has a nice house built with old houses. You can see, among others, the Church of the Annunciation with a high square tower in Mudejar style. The interior of the temple is decorated with baroque sculptures and paintings.

In the past, the entire Old City area was surrounded by forts. One of them is located in the port of the Castillo de San Juan Bautista. Right next to it is the modern body of the Tenerife Auditorium built at the beginning of the 20th and 21st centuries. The remains of the old 16th century castle, the Castillo de San Cristóbal, can be seen in the underground gallery. Another attraction of the city is the botanical garden opened in 2008 on the site of the ancient garbage island. For fresh fruits, vegetables, and other foods, head to the indoor market Mercado de Nuestra Señora de Africa.

The García Sanabria Municipal Park is a landmark in the city of Tenerife, a popular vacation destination for citizens and tourists.The Municipal Landscape Park was founded in 1926 and is named after the mayor of Santiago García Sanabria, who approved its construction and who

Concert Hall of the Grand Opera of Tenerife

When you enter the city, you can see the original architecture of the building, reminiscent of a peak, a candle, and a wave at the same time - a concert hall in Tenerife. The Tenerife Auditorium impresses not only for its architectural forms, but also for its technical capacity, so if yo

Museum of Nature and Archeology

The Museum of Nature and Man is one of the most famous places not only on the island, but in the whole world. There is a lot to see in the museum of nature and man, because it absorbed the exhibits of two museums at the same time, that of natural sciences and that of archeology. Housed in

The Santa Cruz market building is located a few blocks from Plaza España in Plaza de Santa Cruz de la Sierra. The Our Lady of Africa Market looks like a castle with the arched entrance, the towers, the tall clock tower in front of the entrance and the courtyard. This is the main mar

It is the largest square in the city and was built in 1929 where the San Cristóbal castle was located. It is located between Calle del Castillo and the port, along the Alameda del Duque de Santa Elena. Surrounded by government buildings and other squares, and centered on a giant ma

The Castle of San Cristóbal

The fort, which is today in the shadow of the huge Auditorium building, is one of the oldest attractions in Santa Cruz. It was built on the coast in the mid-17th century to protect the port, famous at the time for the African slave trade, from pirate attacks from the sea. It was named in h

TEA (Tenerife Space of the Arts)

Also known by the acronym TEA, this space is the result of the collaboration of the Swiss architects Herzog and De Meuron and the canary Virgilio Gutiérrez. Promoted by the Cabildo de Tenerife, it houses the Óscar Domínguez Institute, the Island of Tenerife Photograph

Museum of Nature and Man

In the relatively small Canary Islands, it seems that museums should also be small. But the Museum of Nature and Man in Santa Cruz de Tenerife is not small. And his exposition is not ordinary. Suffice to say, it features mummies. Note that the museum keeps mummies of the Guanches - the in

La Rambla de Santa Cruz is itself the most beautiful street in the city and suitable for walking. There are also old buildings in typical Canarian style, modern multi-storey buildings, cafes, restaurants, local sculptures and much more. The architecture is very diverse and can please any

Church of the Conception

The Iglesia de la Concepción is the only church in the Canary Islands that has five naves. The church was built on the site of the first chapel built by the Spanish conquerors after the landing in Tenerife. The local population calls this church the "Cathedral of Santa Cruz". This

Plaza de la Candelaria is the central square of Santa Cruz de Tenerife, the capital of the island of Tenerife in the Canary Islands, and serves as one of the most popular places for meetings and walks. It dates back to 1701 and its official name is Plaza de la Constitución. To the

Built in the garden of the Franciscan convent, serving as a model for other squares of the 19th century. The plaza, designed by Manuel de Oraá y Arcocha, was created in 1857 on the former grounds of the orchard of the now-disappeared San Pedro de Alcántara monastery. It was

This theater has been named after the Tenerife playwright Angel Guimer for almost a century, becoming the oldest in the Canary Islands. It was built in 1849. Today, on the stage of the theater, you can see a wide variety of concerts and performances. The bronze sculpture in the shape of

The bustling and cosmopolitan capital of Tenerife, despite its size, is easy to explore on foot or by tram. Most of the attractions, galleries, museums and hotels are located in a triangular area and are all easy to find. If you want to stay in a more elegant hotel during your stay in Tene