Flamenco is a form of Spanish folk music and dance from the region of Andalusia in southern Spain. It includes cante (singing), toque (guitar playing), baile (dance) and palmas (handclaps). First mentioned in literature in 1774, the genre grew out of Andalusian and Romani music and dance styles. Flamenco is often associated with the Romani people of Spain (Gitanos) and a number of famous flamenco artists are of this ethnicity. While flamenco originally crystalized among gypsies in the 18th century, some authors believe that modern flamenco mostly emerged out of late nineteenth-century romanticism.

In recent years flamenco has become popular all over the world and is taught in many countries: in Japan there are more academies than there are in Spain. On November 16, 2010 UNESCO declared flamenco one of the Masterpieces of the Oral and Intangible Heritage of Humanity.

There are many assertions as to the use of the name flamenco as a musical term (summarized below) but no solid evidence for any of them. The word was not recorded as a musical and dance term until the late 18th century. Outside the musical context, the Spanish word flamenco can mean flamingo – referring to the bird, but originally meaning flame-coloured– but also Flemish, i.e. someone or something related to Flanders. The (predominantly Flemish) courtiers of Charles V of the Holy Roman Empire (Carlos I of Spain) were known for their colourful dresses and florid and exaggerated displays of courtesy, but also for their generally arrogant and boisterous behaviour. While no direct connection can be shown, the word flamenco came to be used for arrogant or flamboyant behaviour in general, which then may have come to be applied to the Gitano players and performers.

Another widely held theory, proposed by Andalusian historian Blas Infante in his book Orígenes de lo Flamenco y Secreto del Cante Jondo, suggests that the word flamenco comes from the Hispano-Arabic word fellah mengu, meaning expelled peasant,[ or flahencon meaning collection of songs.Infante argued that the term referred to the ethnic Andalusians of Muslim faith, the Moriscos, who in order to avoid forced exile and religious persecution would have joined Roma newcomers.

Flamenco originally crystalized among the Gypsies in the 18th century. In its earlier forms, it consisted of the song or cante without any musical instruments for accompaniment, with the exception of a long, dry stick that was held upright and rhythmically tapped on the ground. This is known as á palo seco, a term literally translating to by means of a dry stick. Subjects of these songs included various painful and powerful emotions felt by the Gypsies such as lost love, desperation, hardship, imprisonment, and death. 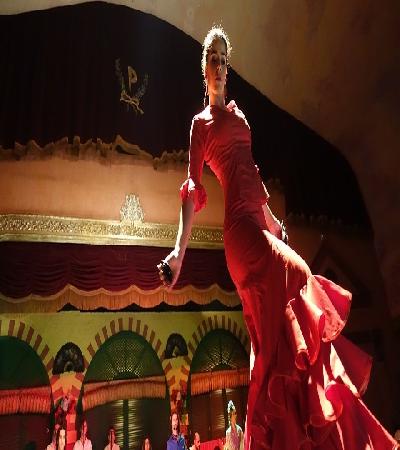 Flamenco music was influenced by Hindu and Arabic music from the beginning, and the melodic song forms known as Arabesques and Melismas are fine examples of Arabic influence upon Flamenco. Important characteristics shared among all these two types of music include the extension of vowels, extended vocalizations of several notes to a single syllable, expression of profound feelings, and priority of emotions over lyrics. Several sound fillers such as ay, layli, layla, lolailo, lereli, and lerele were common among traditional flamenco songs, which may have rooted from the Arabic Layali, a term for improvisation, or from the similar-sounding Arabic expression la illaha illa llah, translating as There is no God but Allah.

Flamenco performance has evolved during the history of this musical genre. In the beginning (the 18th century at the latest), songs were sung without any guitar accompaniment; during the 19th century, the guitar was used to accompany songs, and since the second half of the 19th century, the solo guitar is played in flamenco concerts. From flamenco s beginning in the 18th century most performers have been professionals. For most of the genuine life of flamenco, a folk art that has remarkably conserved an extraordinary level of conservatism within the caucus of European folk music, with its unmistakable rhythmic patterns and tones that mark its varied forms, or palos, flamenco has actually been the concern, like speech itself, of non-professionals in the countryside: goatherders, charcoal-burners, miners, and fishermen, for example.

Further to this, it must be asserted that it is recognised by widely respected figures of its diffusion such as Pepe Arrebola, former President of the Peñas Flamencas de Andalusia, that it is the product of a certain competition between ´payos´or non-gypsies, and gypsies or Roma, each with their own distinctive style, just as it is widely recognised by musicology itself that the lack of field-work in flamencology can truly retrieve the level of what intensity the non-professional impact of flamenco was and no longer exists, in terms of a community-wide spread and profundity: nevertheless, the subject matter of the songs themselves should alert them that the authors of the lyrics were not much concerned with urban themes, and this in turn should remind them of the land itself being the author of the music. Originally they learned from other performers in the manner of an apprenticeship, not in conservatories or dance schools. This lack of formal training led to interesting harmonic findings, with unusual unresolved dissonances. Examples of this are the use of minor 9th tonic chords or the use of the open 1st string as a kind of pedal tone. Today most guitarists undergo rigorous professional training and often can read and play music in other styles; many dancers take courses in ballet and contemporary dance as well as flamenco.

Flamenco occurs in four settings in the main - in the juerga, in small-scale cabaret, in concert venues and in the theatre, though a zambra or spontaneous, and, for the most part Roma celebration, can occur outside any place a tourist or expert on flamenco would be likely to happen on it (and also quite without reference to musicologists in advance).

• The juerga is an informal, spontaneous gathering, rather like a jazz jam session, that can include dancing, singing, palmas (hand clapping), or simply pounding in rhythm on an orange crate or table, adapting to local talent, instrumentation and mood. The cantaores (singers) are the heart and soul of the performance. A meeting place or grouping of Flamenco musicians or artists is called a peña flamenca.
• There are also tablaos, establishments that developed during the 1960s throughout Spain, replacing the café cantante, that may have their own company of performers for each show. Many internationally renowned artists, like the singer Miguel Poveda, started their careers in tablaos flamencos.

• The professional concert is more formal. A traditional concert has only a singer and one guitar while a dance concert usually includes two or three guitars, one or more singers singing solo in turn and one or more dancers. One of the singers may play the cajon, a wooden box drum played with the hands or else it may be played by a percussionist, and all performers will clap even if there are dedicated palmeros. The so-called Nuevo Flamenco or "new flamenco", popularized by artists such as Camarón de la Isla, may include flutes or saxophones, a piano or other keyboard, even the bass guitar and the electric guitar.
• Finally, the theatrical presentation of flamenco is now an extended and sophisticated performance in its own right, comparable to a ballet, by such ensembles as the Maria Pagès and the famous Sara Baras Ballet Flamenco Company.