Bullfighting in Spain - Travel to Spain : -

Bullfighting  is a traditional spectacle of Spain, Portugal, southern France and some Hispanic American countries (Mexico, Colombia, Ecuador, Venezuela, and Peru)and the Philippines, in which one or more bulls are baited, and then killed in a bullring for the entertainment of the audience. Although a blood sport, by definition, some followers of the spectacle prefer to view it as fine art and not a sport, as there are no elements of competition in the proceedings. In Portugal, it is illegal to kill a bull in the arena, so it is removed and either professionally killed or treated and released into its owners (ganadero) fields. 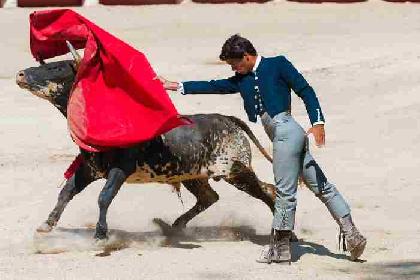 The bullfight, as it is practiced today, involves professional toreros (of which the most senior is called a matador) who execute various formal moves which can be interpreted and innovated according to the bullfighter s style or school. It has been alleged that toreros seek to elicit inspiration and art from their work and an emotional connection with the crowd transmitted through the bull. Such maneuvers are performed at close range after the bull has first been weakened and tired by lances and short spears with barbs which are thrust into and then hang from the bull. The close proximity places the bullfighter at some risk of being gored or trampled by the weakened bull. After the bull has been hooked multiple times behind the shoulder by other matadors in the arena, the bullfight usually concludes with the killing of the bull by a single sword thrust, which is called the estocada. In Portugal, the finale consists of a tradition called the pega, where men (forcados) try to grab and hold the bull by its horns when it runs at them.
Supporters of bullfighting argue that it is a culturally important tradition and a fully developed art form on par with painting, dancing and music, whilst critics hold that it is a blood sport perpetrated as a cowardly act resulting in the suffering of bulls and horses.

There are many historic fighting venues in the Iberian Peninsula, France and Hispanic America. The largest venue of its kind is the Plaza México in central Mexico City, which seats 48,000 people, and the oldest is the La Maestranza in Seville, Spain, which was first used for bullfighting in 1765.

Forms of non-lethal bullfighting also appear outside the Iberian and Francophone world, including the Tamil Nadu practice of jallikattu; and the Portuguese-influenced mchezo wa ngombe is also practiced on the Tanzanian islands of Pemba and Zanzibar. Types of bullfighting which involve bulls fighting other bulls, rather than humans, are found in the Balkans, Turkey, the Persian Gulf, Bangladesh, Japan, Peru, and Korea. In many parts of the Western United States, various rodeo events like calf roping and bull riding were influenced by the Spanish bullfighting.

Spanish-style bullfighting is called corrida de toros (literally "running of bulls") or la fiesta ("the festival"). In the traditional corrida, three matadores, each fight two bulls, each of which is between four and six years old and weighs no less than 460 kg (1,014 lb) Each matador has six assistants—two picadores ("lancers on horseback") mounted on horseback, three banderilleros – who along with the matadors are collectively known as toreros ("bullfighters") – and a mozo de espadas ("sword page"). Collectively they comprise a cuadrilla ("entourage"). The word "matador" is only used in English, whereas in Spanish the more general "torero" is used and only when needed to distinguish the full title "matador de toros" is used.

he modern corrida is highly ritualized, with three distinct stages or tercios ("thirds"), the start of each being announced by a bugle sound. The participants first enter the arena in a parade, called the paseíllo, to salute the presiding dignitary, accompanied by band music. Torero costumes are inspired by 17th-century Andalusian clothing, and matadores are easily distinguished by the gold of their traje de luces ("suit of lights") as opposed to the lesser banderilleros who are also called toreros de Plata ("bullfighters of silver"). Next, the bull enters the ring to be tested for ferocity by the matador and banderilleros with the magenta and gold capote ("cape"). This is the first stage, the tercio de varas ("the lancing third"), and the matador first confronts the bull with the capote, performing a series of passes and observing the behavior and quirks of the bull. 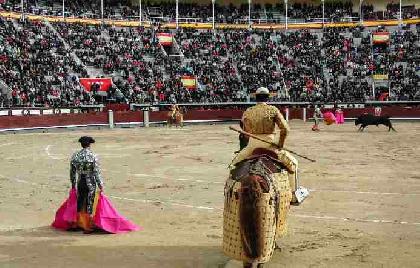 Next, a picador enters the arena on horseback armed with a vara ("lance"). To protect the horse from the bull s horns, the horse is surrounded by a protective, padded covering called "peto". Prior to 1930, the horse did not wear any protection, and the bull would usually disembowel the horse during this stage. Until this change was instituted, the number of horses killed during a fight was higher than the number of bulls killed.
At this point, the picador stabs just behind the morrillo, a mound of muscle on the fighting bull s neck, weakening the neck muscles and leading to the animal s first loss of blood. The manner in which the bull charges the horse provides important clues to the matador about which side the bull favors. If the picador is successful, the bull will hold its head and horns slightly lower during the following stages of the fight. This ultimately enables the matador to perform the killing thrust later in the performance. The encounter with the picador often fundamentally changes the behavior of a bull; distracted and unengaging bulls will become more focused and stay on a single target instead of charging at everything that moves.

In the next stage, the tercio de banderillas ("the third of banderillas"), each of the three banderilleros attempts to plant two banderillas, sharp barbed sticks into the bull s shoulders. These anger and agitate, but further weaken, the bull which has been tired by his attacks on the horse and the damage he has taken from the lance. Sometimes a matador will place his own banderillas. If so, he usually embellishes this part of his performance and employs more varied maneuvers than the standard "al cuarteo" method usually used by banderilleros as part of a matadors cuadrilla.

n the final stage, the tercio de muerte ("the third of death"), the matador re-enters the ring alone with a small red cape, or muleta, and a sword. It is a common misconception that the color red is supposed to anger the bull, because bulls, in fact, are colorblind. The cape is thought to be red to mask the bull s blood, although this is now also a matter of tradition. The matador uses his cape to attract the bull in a series of passes which serve the dual purpose of wearing the animal down for the kill and producing the ostensible beautiful display or faena. He may also demonstrate his domination over the bull by caping and bringing it especially close to his body. The faena is the entire performance with the cape (muleta) and it is usually broken down into tandas, or "series", of passes. The series (tanda) ends with a final series of passes in which the matador, using the cape, attempts to maneuver the bull into a position to stab it between the shoulder blades and through the aorta or heart. The sword is called "Estoque" and the act of thrusting the sword is called an estocada. The sword used by the matador during the initial series while he is trying to entertain the crowd is called the fake sword (estoque simulado). This fake sword is made out of wood or aluminum,in contrast to the estoque de verdad (real sword), which is made out of steel and is used for the actual final kill with the thrust through the bull's heart. The fake sword (estoque simulado) is lighter and therefore much easier to handle. However, at the end of the tercio de muerte, when the matador has finished his series of passes (faena) for the crowd s entertainment, the matador will change his fake sword (estoque simulado) for the real steel sword (estoque de verdad) to perform the estocada and kill the bull with a pierce through the heart, if all goes according to plan. Many times the bull doesnt get pierced through the heart during the estocada initially and repeated efforts must be made to finally bring the bull down and end his life.

If the matador has performed particularly well, the crowd may petition the president to award the matador an ear of the bull by waving white handkerchiefs. If his performance was exceptional, he will award two ears, and in certain more rural rings, a tail can still be awarded. Very rarely, if the public or the matador believe that the bull has fought extremely bravely, the events president may be petitioned to grant the bull a pardon (indulto) and if it is granted, the bull s life is spared; and it is allowed to leave the ring alive and return to the ranch from where it came. Then the bull becomes a stud bull for the rest of its life.