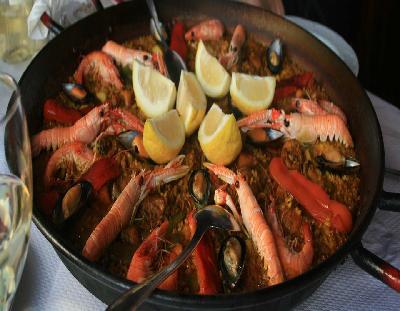 Spanish cuisine consists of a variety of dishes, which stem from differences in geography, culture and climate. It is heavily influenced by seafood available from the waters that surround the country, and reflects the country s deep maritime roots. It is a Mediterranean diet.

• Aragon: jamón serrano (cured ham) in Teruel, migas, very typical in small villages. Nuestra Señora del Pilar sweets in Zaragoza. Ternasco con patatas a lo pobre, one of the most popular dishes in Aragon. Borrajas, vegetable typical of this zone and chiretas, very popular in Ribagorza and Somontano de Barbastro. Peaches with red wine (from Calanda, in Teruel). Somontano, Borja and other wines.

• Asturias: the most famous regional dish is fabada asturiana, a rich stew made with large white beans (fabes). Apple groves foster the production of the traditional alcoholic drink, a natural cider (sidra).[1] Sidra is traditionally poured in by an expert server (or escanciador): the bottle is raised high above his or her head to oxygenate the brew as it moves into the glass below. Asturian cheeses, especially Cabrales, are also famous throughout Spain and beyond; Cabrales is known for its pungent odour and strong flavour. Other major dishes include faba beans with clams, Asturian stew, frixuelos, and rice pudding.
• Balearic Islands: a typical island-based diet of seafood and simple, vegetable-based dishes as well as sobrassada, samfaina (ratatouille) and coques (or cocas) are typical of Majorcan cuisine generally. Majorcas biggest export is the ensaïmada, a pastry. Mahón cheese (Denominación de Origen) is from Minorca.

• Basque Country: skillfully cooked dishes such as txangurro relleno (spider crab), marmitako. Idiazábal cheese and a distinctive wine, txakoli. Piquillo peppers, filled with cod or tuna.
• Canary Islands: possibly the only region of Spain where spicy food is traditionally eaten (a spicy sauce known as mojo is produced locally. Gofio, a local type of flour, is used as a thickener for stews. Papas arrugadas are perhaps the best-known local dish: - these are potatoes preserved in salt, which causes them to shrivel. Frangollo is a common dessert of the Canary Islands.

• Cantabria: the most famous Cantabrian dish is cocido montañés, a rich stew made with beans, cabbage and pork. Seafood is widely used and bonito is present in the typical sorropotún or marmite. Recognized quality meats are Tudanca veal and game meat. Cantabrian pastries include the traditional famous throughout Spain sobaos and quesadas pasiegas. Dairy products include Cantabrian cream cheese, smoked cheeses, picón Bejes-Tresviso and quesucos de Liébana. Orujo is the Cantabrian pomace brandy. Cider (sidra) and chacolí (known as txakoli in Basque Country) wine were a speciality that are recovering.[2][3] Cantabria has two wines with DOC: Costa de Cantabria and Liébana.

• Cataluña: alongside Valencia, Catalonia has a long tradition of rice-dishes and seafood. In addition, cooked and cured sausages (fuet) from Vic are famous. Perhaps the most well-known dish is the Catalan cream (crema catalana), similar to crème brûlée. Catalan cuisine is rich, pa amb tomàquet and botifarra are typical food of Catalonia.

• La Rioja: above all its international Rioja wines, as well as its vegetable soups and its pepper and potato dishes.

• Galicia: caldo gallego; an array of seafoods, especially octopus, cod and goose barnacles; tarta de Santiago, a tart made of almonds and lemon; empanadas; Albariño wine from the Rias Baixas. Polbo á feira (Galician), or pulpo a la gallega (Spanish), an octopus dish where the octopus is boiled, sprinkled with coarse salt and paprika (pemento picante) and drizzled with olive oil. 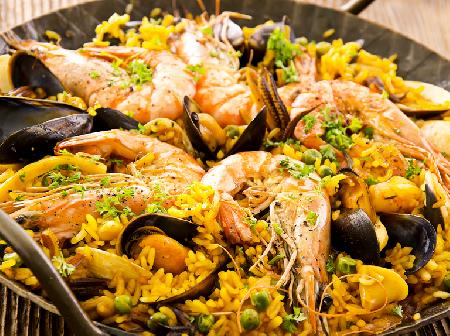 • Madrid: the cocido madrileño (Madrids chickpea stew) and the tripe dish callos a la madrileña, oreja de cerdo (pig s ear tapa). Strawberries from Aranjuez or melons from Villaconejos, the wines from Navalcarnero and the anisette (anís) liqueur of Chinchón.

• Murcia: the products of its rich market gardens, such as zarangollo; fish and lamb stews; and the wines of Jumilla, Yecla or Bullas. There are also the Murcian migas.
• Navarre: vegetable stews, Tudela s lettuce hearts with anchovies, salmon, Trout (like trucha a la Navarra); piquillo peppers, which are often stuffed with meat; Roncal and Idiazábal cheeses, curd from Ultzama, claret wine, and patxaran liquor.

• Valencia: the Valencian region, specialises amongst others in the famous paella, and is its birthplace. This dish is very popular, and its common to cook one each Sunday for family lunch. In fact, in Valencia, during Falles, one of the biggest holidays there, it is quite normal to find big paellas being cooked in the street. The typical Valencian paella contains meat and vegetables, but many other variants of rice-based dishes can be found, with shellfish, meatballs or just covered in egg (arròs amb crost).