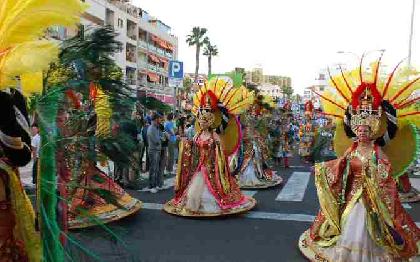 In 1980, it was declared a Tourist Festival of International Interest by the Secretary of State for Tourism. The Carnival of Santa Cruz de Tenerife aspires to become a World Heritage Site . as a declaration of its status as a World Heritage Site by UNESCO would promote the festival internationally. In 1987, singer Celia Cruz went to the Carnival Chicharrero with Billo s Caracas Boys; attended by 250,000 people, the concert was registered in the Guinness Book of Records as the largest gathering of people in an outdoor plaza to attend a concert.

The festivities on the streets of Santa Cruz de Tenerife start on the Friday before Carnival with an opening parade, which reaches its height during the night when thousands of people in fancy dresses dance until the early hours of the next day. The party continues night after night until Ash Wednesday. That day, people of Santa Cruz de Tenerife celebrate the "entierro de la sardina" (burial of the sardine), and with this event the carnival is officially over. However, the party starts up again the following weekend, known as the weekend of the piñata.

The festival has two parts: the official Carnival, and the Carnival on the street. The official carnival has more than a hundred groups, including murgas, comparsas, rondallas and other musical groups. The street carnival is more loosely organized, and comprises the people celebrating on the streets. Thousands of people come each day to the streets to participate, most of whom wear a disguise in accordance with Carnival tradition.