The Route of the Drum in Teruel-Aragon - Travel to Spain : Spanish Celebrations : - 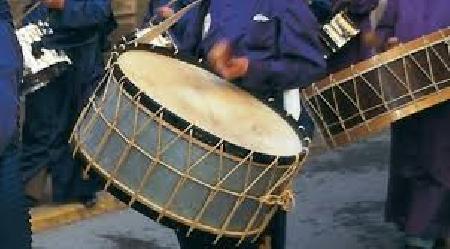 The Route of the Drum Festival (La Ruta del Tambor) during Easter is one of the most important cultural heritages of Aragon. It is of religious origin, but over time has acquired different nuances, becoming a popular, cultural, family and social festival which has been declared of National Tourist Interest. The Aragonese filmmaker Luis Buñuel, himself a native of Calanda, immortalized this celebration in books and films.

Route of the Drum in Teruel AragonAlbalate del Arzobispo, Alcañiz, Alcorisa, Andorra, Calanda, Híjar, La Puebla de Híjar, Samper de Calanda, Urrea de Gaén are the nine villages that make up the Route of the Drum, with the sound of drums and bass drums making it an Easter Festival which is difficult to forget.The sounds of drums and bass drums fill the streets and squares and attract a multitude of visitors to learn about the traditions and customs of the region of Lower Aragon.

It is always difficult to establish when such a popular tradition began. Of the nine villages on the Drum Route, Híjar, Calanda and Alcañiz are the ones that retain the legends, oral traditions and historical data that attest to the antiquity of playing drums. The remaining villages incorporated playing the drum and bass drum at Easter later.