Triana Bridge - Main Destinations in Spain : Travel to Seville : What to Visit in Seville : - 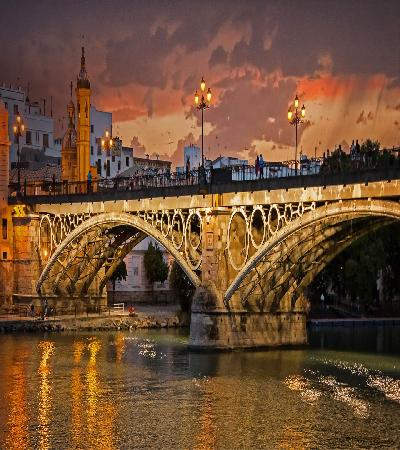 The Isabel II bridge in Seville was built in 1847-1852 by French engineers Bernadet and Steinacher, to replace the old ship bridge from 1171. It is a good example of 19th century iron architecture. On the way from the Torre del Oro you pass the Monument to Tolerance by contemporary Basque sculptor Eduardo Chillida.
Having crossed the bridge, you will have a pleasant view of the center of the city of Seville on the other side of the Guadalquivir River.
The Isabel II bridge is also popularly called the Triana Bridge, while continuing towards the heart of the Triana neighborhood. Here the bridge is based on the remains of the old castle of San Jorge, which was the last headquarters of the Inquisition in Seville.