Spain Square - Main Destinations in Spain : Travel to Seville : What to Visit in Seville : - 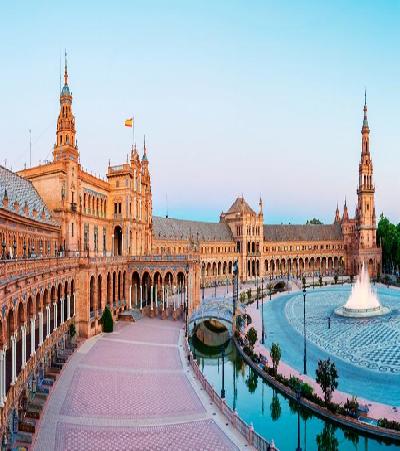 The Plaza de España was built in 1928. Its opening was scheduled to coincide with the opening of the Ibero-American exhibition, held a year later. Most impressive are the polychrome ceramic tiles that paved the plaza and the large fountain in the center. In the arcades of the surrounding buildings you can read information about the different regions of Spain.

Plaza de España is a spectacular example of the Renaissance, a popular architectural style in Spain. Its buildings were designed by Aníbal González, a renowned Spanish architect from the early 20th century. He used a combination of Art Deco and Neo-Mudéjar architectural styles. The large semicircular building that surrounds the plaza symbolizes the embrace between Spain and its former colonies. The square overlooks the Guadalquivir River, the largest navigable river in Spain, where the colonizers began their journey to discover new continents.

During the Latin American Exhibition, the building was used for Spanish exhibitions related to technology and industry. There was also a large exhibition called the Discovery Hall of America. It featured invaluable documents, maps, and exhibits related to the discovery of the Americas, as well as detailed dioramas of important historical events. The highlights of the exhibition included a series of letters from Christopher Columbus and the last will of Hernán Cortés. Initially, the building was planned to be part of the University of Seville, but was instead used by the armed forces as its main office. Today, it houses government offices. Plaza España is a must see for Seville.

Plaza España is a must see for Seville. It is the perfect place for a relaxing walk during the day. The magnificent central fountain in the square was designed by Vicente Traver, a famous Spanish architect who designed several famous buildings throughout Seville. On a hot summer day, the fountain serves as a refreshing oasis for tourists. Today, the Plaza de España is visited not only by ordinary tourists, but also by fans of the "Star Wars" saga, since it was here that an episode of "Attack of the Clones" was filmed.