General Archive of the Indies - Main Destinations in Spain : Travel to Seville : What to Visit in Seville : - 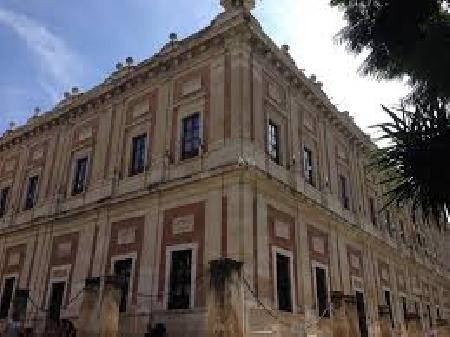 There is a building in Seville that contains a single file. It contains complete information on all the colonies belonging to the Spanish Empire that were located in the Americas and in the Philippines.
The General Archive of the Indies was built and designed in the late 16th century by the Renaissance architect Juan de Herrera.
Before its construction, all commercial transactions in the city were carried out by local merchants in the Orange Court of the Cathedral, which ultimately sparked outrage from the archbishop, who asked King Philip II to ban all commerce in the Cathedral.
Thus was born the idea of ​​building an exchange, which was necessary due to the rapid growth of Seville's economy. However, it was not used for a long time, and meetings of the Seville Academy of Arts began to be held in the mid-17th century. In 1785, by order of King Carlos III, the Archives of the Council of the Indies were sent here - the task of gathering in one place all the documents that contained information about Spain as a successful and quite large maritime power was undertaken.

The style of the building has strong Renaissance features. The decoration of the exterior facades lasted until 1629. The Archivo de Indias was designed by the architect Juan de Herrera on behalf of Felipe II. The King wanted to erect a building for the Seville Merchants' Guild.
In 1785 King Charles III issued a decree to transfer the archive of the Council of India to this place. This was driven by the desire to gather documents in one place that proved that Spain was a great and successful maritime power. The building had to be converted to house all the documents that were previously in Cádiz, Simancas and Seville.
The Archive of India is now a truly unique repository, both in volume and in depth of the information collected here. In total, 43,000 volumes are stored in the building. The total length of the shelves with books and documents placed is almost 9 km.
Among the materials you can find various maps, information on the sea voyages of the Spanish sailors, maps of the conquered cities, information on the Spanish conquerors, marine magazines, Columbus reports and many other information.
The archive funds are closed. But the archive constantly has exhibitions, where curious and rare documents are exhibited. Entrance to all exhibitions is free.
In 1987 the Archive building and its holdings were inscribed on the Unesco World Heritage List.
The building had a rather discreet facade. A series of balustrades ran along the perimeter of the roof and obelisks were installed at the corners. In the center was a large inner courtyard.
Among the materials of the Archive of the Indies are notes from the first conquerors, the newspaper of Christopher Columbus, plans and maps of colonial cities, Miguel de Cervantes' application for an official position, the papal bull of demarcation, which divided the world between Spain and Portugal.
Address: Av. De la Constitución, s / n, 41004 Seville, Spain