Antiquarium - Main Destinations in Spain : Travel to Seville : What to Visit in Seville : - 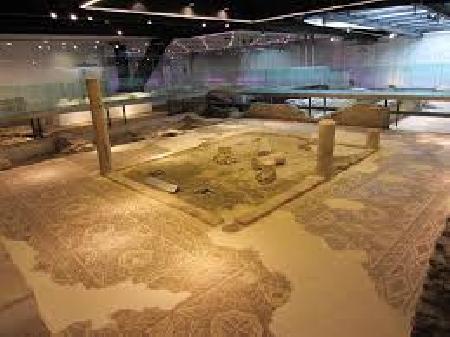 The Antiquarium of Seville is located in the modern Parasol Metropol building, underground, 5 meters from street level. The museum is reached by going down the stairs from the Plaza where the ruins can be seen through the glass windows on the right before entering. In 2004 the German architect Jürgen Mayer won a competition with his

Metropol Parasol project to transform 'the Plaza de la Encarnación' into what it is today. The Antiquarium was inaugurated on March 27, 2011 and presents the most important Roman finds in Seville. The discoveries were made during the excavation of the area to build a parking lot. This car park was never built. The Antiquarium has become an important part of it. You can admire mosaics and Roman houses from the 1st century AD. Because the Guadalquivir had branches throughout the city at the time, a major Roman fish auction was built on the north side of Seville. This can be visited almost completely intact. There are also remains of a Roman oil lamp factory.

What is so special is the fact that you can see the passing of the centuries, so to speak. Apart from the houses of the first century there are houses of the fifth century and also of the Arab period of the thirteenth century. A nice detail is that the materials were reused at the time. You can see that some tiles have been used in another century and solid pillars have been found in the houses of other buildings such as those of the Visigoths.

There is also a clear difference in height between the settlements of the early Romans and later generations. Through all these findings it is clear that the typical Andalusian patio houses still descend from many generations ago.
A small peculiarity (for children) are the tiles with games from the Roman era. Excavations are still being carried out in and around Seville and are on display.
Address: Pl. De la Encarnación, 37, 41003 Seville, Spain
Telephone: +34 955 47 15 80
Opening hours: 11 am to 2 pm and 3 pm to 8 pm. Sundays from 10 a.m. to 1.30 p.m.
Entry 2 euros for all non-residents in Seville.
Residents of Seville and children up to 2 years of age free.